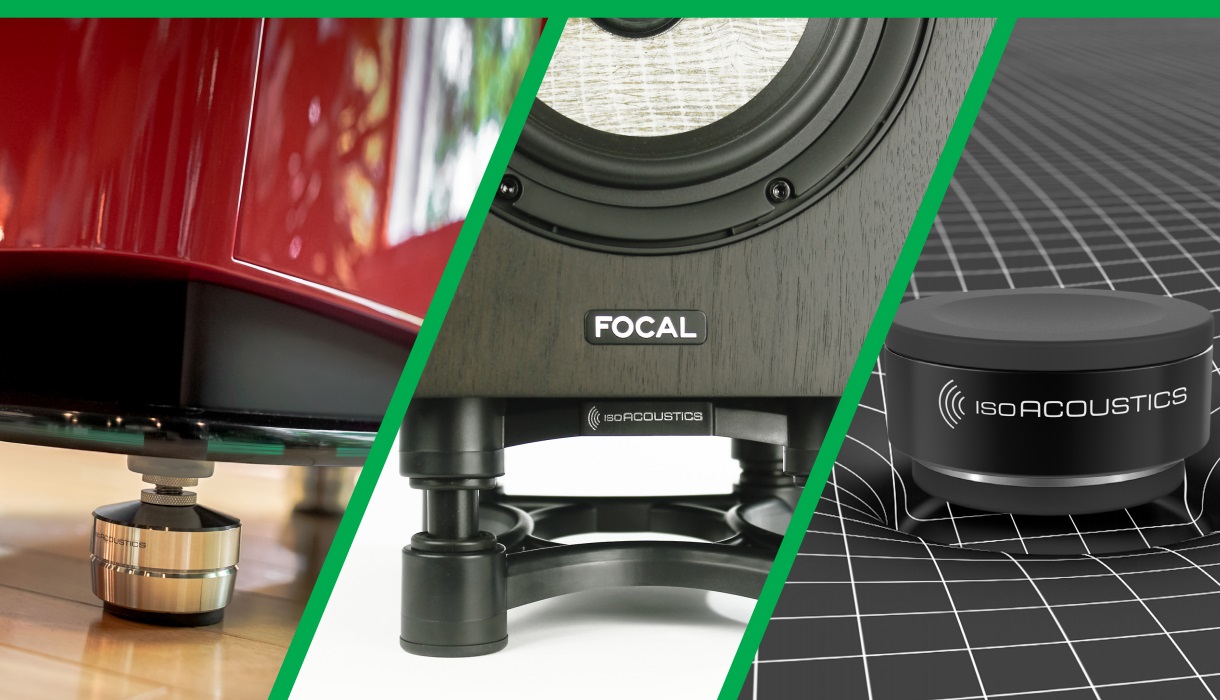 IsoAcoustics Inc. has been developing products for the audio industry since January 2012. IsoAcoustics produces a growing range of products for both Home Audio and Professional Audio which are currently distributed in over 70 countries. This article will review testing results from the National Research Council of Canada and will explain how IsoAcoustics isolation technology allows speakers to perform at their best. 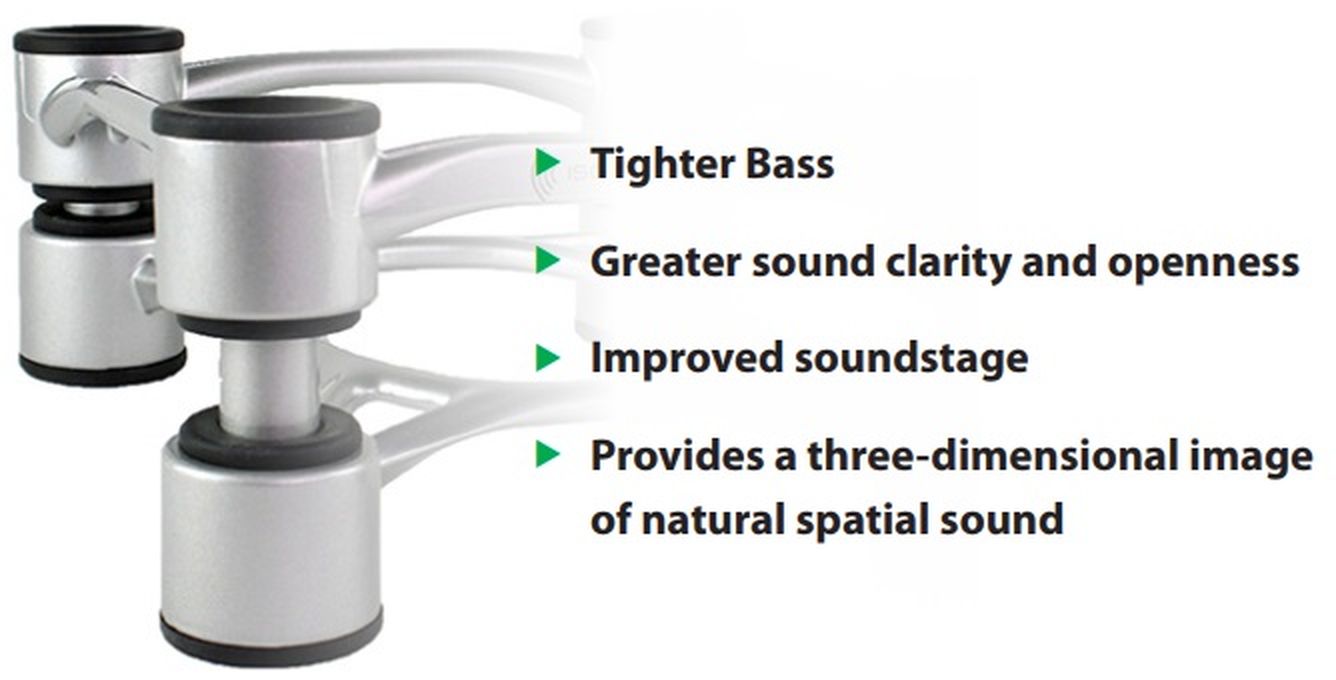 BUT HOW DOES IT WORK?

Speaker isolation is commonly misunderstood. There are many diﬀerent theories and approaches to isolation which make it difficult for any consumer to determine what information is correct and how it all works.

This article will help to explain the following:

THE 3 CHALLENGES WITH SPEAKER PLACEMENT 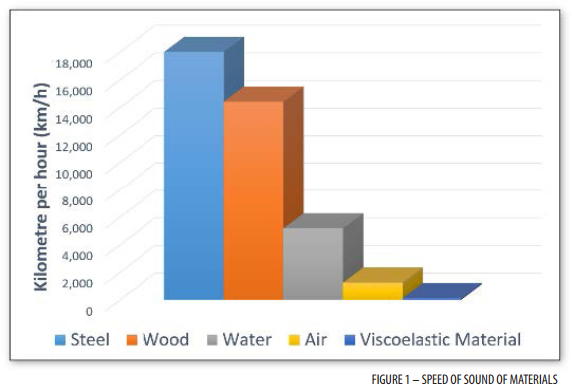 The first two points are commonly understood and are typically the first things that come to mind when
thinking of speaker isolation. When a speaker is resting on a surface like a ﬂimsy desktop, it is easy to imagine the impact that the speaker can have on the surface. The speaker is vibrating and exciting the supporting surface which is creating dissonant sounds. The second point describes a situation where the energy resonates through the supporting surface and carries into other rooms or excites other objects within the listening area. In response to this, high-end pro studios isolate or “ﬂoat” their control rooms in order to eliminate structure borne energy transfer into the room and also out of the room. The solid materials are in fact better conductors of sound compared to air which is illustrated in figure 1. For example, a train can be heard through the structure borne noise in the tracks well before the soundwaves can he heard.

Internal reﬂections are another consequence of speaker placement which can result in a loss of sound clarity and can cause sounds to become less three dimensional and spacious. Vibrations are inherent in the speaker, but any vibrations reﬂecting oﬀ the supporting surface and returning through any mechanical connection are a cause of internal reﬂections. Imagine, for example, bolting a pipe to a wall and hitting it with a hammer. The vibrations go down the pipe, hit the wall and then come back. These internal reﬂections cause smear which results in a loss of sound clarity and openness. Any artifacts (smear) that are replicated in the two channels are perceived to be in the middle, causing the sound stage to collapse.

There is a common misconception that isolation can result in a loss in output in the lower frequencies. Testing completed in the Anechoic Chamber at the NRC measured the decibel level output at various frequencies when using IsoAcoustics products and using spikes. The results using both IsoAcoustics isolation and spikes are compared on fgure 4. The testing concludes that there was no colorization when using the GAIA isolators. The decibel output is consistent between spikes and the GAIA’s through the tested frequencies ranging from 20 Hz to 20 kHz. One of the IsoAcoustics fundamental principles is to ensure sound accuracy and no colorization. 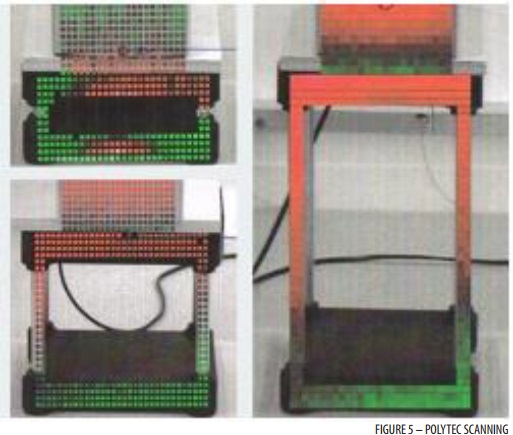 The Laservibrometer is an instrument that is used to make vibration measurements of a surface. Laser scanning vibrometry rapidly scans point-by-point over the test object’s surface to measure vibration levels at various points. The results of the laser scanning vibrometry are shown in figure 5 which helps to illustrate how IsoAcoustics manages the energy of the speaker and reduces the transfer of resonant energy from speaker to the supporting surface.

IsoAcoustics products are designed and tested to provide a high degree of speaker isolation to greatly reduce the symptoms associated with the transfer of resonant energy from the speaker to the supporting surfaces.

Figure 6 is a photo of the setup used at the NRC to test the GAIA’s and spikes with the laservibrometer.

The graph shows that the velocity of the vibrations were signifcantly lower when the GAIA isolators were installed on the speakers. The change in the levels of the vibrations was also smoother as the output of the speaker traveled through the range of frequencies. The reduction of vibration is related to the boundary condition which is explained next. 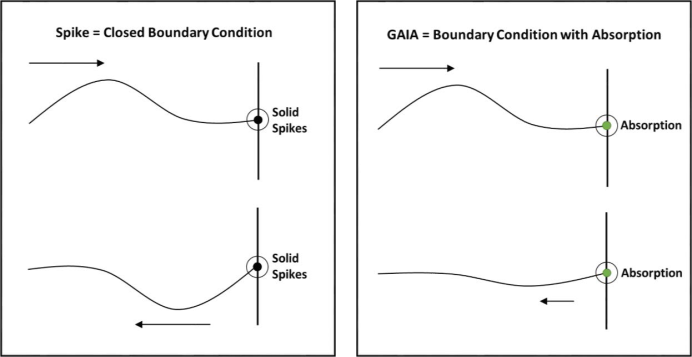 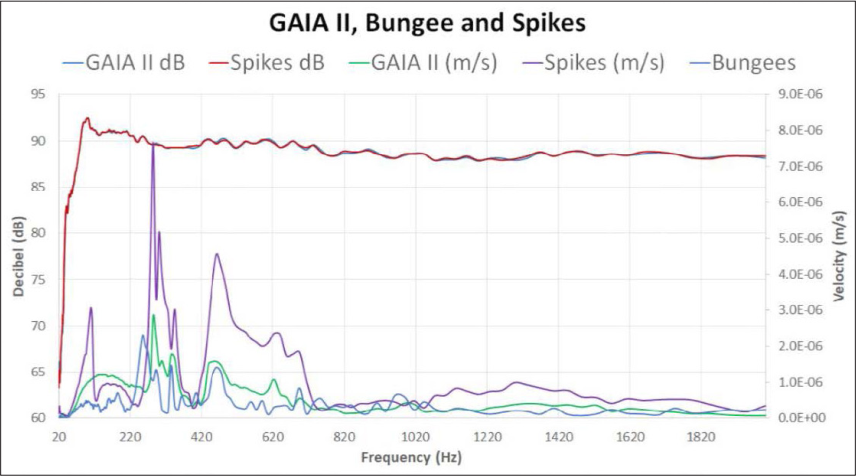 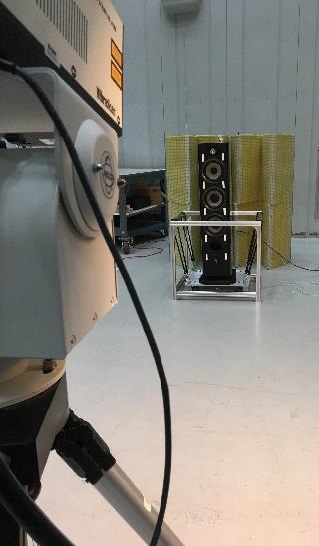 In order to test how much vibration is inherant in the speaker and how much is related to the boundary condition, the testing was repeated with the speakers suspended on bungee cords to remove the connection to the supporting surface.

The speakers were tested on the GAIA’s and then the test was repeated with the speakers raised onto spikes using solenoids. The test was repeated again with the speaker base suspended by bungee cords. The variation in height was kept to within ¼” (less than ½ a wave length at 20 khz) when changing between spikes, GAIA’s or Bungee. This setup allowed for the testing of each setup while keeping other variables consistent.

The IsoAcoustics award winning patented isolation design manages the energy of the speaker to provide the best speaker performance. The eﬀectiveness of the isolation is a result of the shape, thickness, durometer and characteristics of their proprietary isolation material and the way the top and bottom isolators function together with the internal insert to manage vibrations.

IsoAcoustics stands are directional and designed to be positioned with the logo facing in the same direction as the motive forces of the speakers. As a result they manage the energy on-axis as opposed to homogenous materials that allow the speakers to oscillate in all directions. This method of managing the energy provides a high degree of isolation, improved sound clarity, focus and openness.

Connection to speaker and supporting surface

IsoAcoustics products are designed to connect to the base of the speaker and to the supporting surface so that the energy is eﬀectively managed by the internal isolators. The shape of the isolators creates a suction cup eﬀect on smooth surfaces or provides a strong friction grip if the surface is textured.